Although lane-splitting has been going on here forever and is now legal, it seems like some people are completely oblivious to it, or the fact that they’re surrounded by seat belts, air bags and 4,000 pounds of metal and you just have a jacket.

Then, they pull out in front of you.

An experienced motorcyclist expects the unexpected maneuvers from these drivers, and even the occasional good and bike-aware driver who made a mistake or was distracted by their phone while switching lanes. But, no matter how alert you are, a driver may cut you off leaving you no options or no time to react. That’s when there is a collision.

Many of these collisions occur in the 1-20MPH range, although a significant amount take place in stopped traffic or in traffic in the 20-30 or 30-40MPH range as well.

Lane Splitting is Legal in California

California was the first state in the country to make lane splitting legal. Pursuant to California Vehicle Code section 21658.1, a motorcycle with two wheels “in contact with the ground may be driven between rows of stopped or moving vehicles in the same lane, including both divided and undivided streets, roads, or highways, if both of the following conditions are present:

(1) The motorcycle is not driven at a speed of more than 50 miles per hour.

(2) The motorcycle is not driven more than 15 miles per hour faster than the
speed of traffic moving in the same direction.”

Section 21658.1 doesn’t authorize a motorcycle to be driven in a manner contrary to other laws in connection with the safe operation of a vehicle. 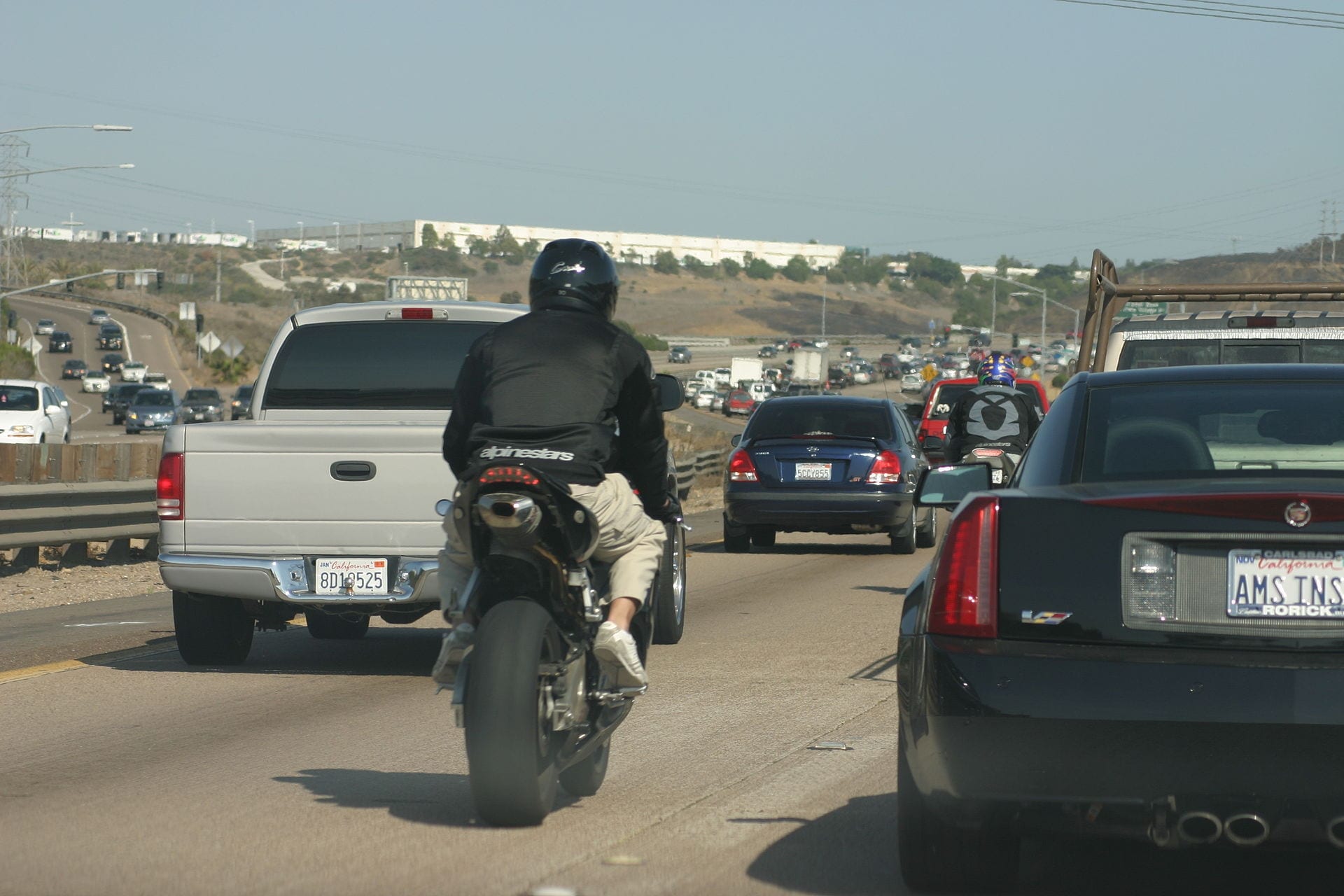 The California legislature recognizes that given their smaller size, motorcycles are far more maneuverable than passenger vehicles and trucks. Given that awareness, the state permits motorcyclists to drive in ways that operators of passenger vehicles can’t. That includes lane splitting.

Lane splitting has been a subject of controversy since long before California’s legislature made it legal by statute. In the past, there was no law against it. Drivers of passenger vehicles and trucks view lane splitting as dangerous riding behavior. Motorcyclists view it as necessarily convenient while it also operates to extricate them from dangerous traffic situations.

After an accident, a motorcyclist is likely to allege that the driver of a motor vehicle changed lanes abruptly or failed to operate his or her vehicle in a safe and careful manner by weaving in his or her own lane. The driver of the motor vehicle is likely to raise a comparative negligence affirmative defense and allege that the injured or dead lane splitting motorcyclist was also careless and negligent. Of course, the motorcyclist or their estate would rely on the new lane splitting statute, while also arguing that even if the rider was negligent, he could still legally prevail over the negligent driver.

People involved in motorcycle wrecks often have the most difficulty in proving negligence. As attorneys who specialize in all types of auto accidents in Los Angeles, we know all to well the games insurance companies play. In many cases they will try to blame you for your injuries. For example, an insurer could try to blame you for your injuries and tell you that you were driving too fast. Even if you did contribute to your injuries, you can still be compensated. That’s because California is a  comparative negligence state.

Get Your Investigation Started Right Away

Motorcycle accidents almost always occur in an instant, and the faster that a motorcyclist is traveling at the time of impact, the higher the likelihood is that injuries will be severe or even fatal. That could be significant financial exposure to an opposing insurance company. As soon as that insurer is notified of the accident, it’s going to begin its investigation. You deserve a prompt investigation too. That investigation typically includes the following:

Never Give the Opposing Insurer a Statement of Any Kind

Politely refuse to give any type of a statement to the opposing insurer. California law doesn’t require you to do that. You’d only be giving up rights that a judge isn’t going to give back to you. The law can be very unforgiving, and your own words from your statement are likely to be used against you in the future.

After a motorcycle accident, if you are left with serious injuries you will want to consult with an experienced injury attorney. In many instances you will get significantly more compensation for your injuries with a lawyer than you would receive without one. In the event you are better off without an attorney, we will tell you right away as we have no desire to waste your time.

Preserve and protect your rights by calling or emailing us right away after being injured in any motorcycle accident. If we enter into a retainer agreement with you, no legal fees at all would be due unless we obtain a settlement or verdict for you. As a motorcyclist, you have the same rights to the road and the courts as anybody else. Protect them, and then invoke them if you’ve been injured by a motorist who was careless and negligent.