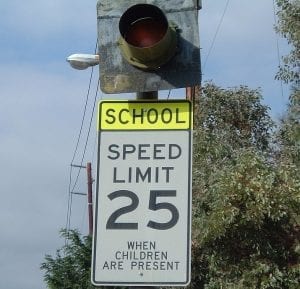 School zones exist to keep students safe, and in California, it’s a potential $350 fine plus additional fees and court costs that could over double that amount. Speeding in a school zone is the number one cause of school zone injuries and fatalities in school zones, and according to a study a research group called Safe Routes to School, around 100 kids die each year in a school zone crash and another 25,000 are injured.

On Monday, November 18, 2019, at around 3:20 p.m., a teen was struck while crossing a street outside a school by a car allegedly speeding. The crash happened on a stretch of Cole Road near Lambert Road which has a speed limit of 30 mph.

According to neighbors, cars speeding through during school times has been a problem. One longtime resident stated that this accident was one of the worst she’s seen, and wondered why the city hadn’t done anything about the speeding.

The teen was taken to a local hospital in critical condition. Police are still investigating the incident, and charges are likely to be filed against the driver.

Who’s at Fault in a School Crossing Accident?

A school zone is usually marked by signs and flashing lights to put motorists on notice that children are likely to be present. In most cases, the traffic must slow down to around 20 mph during certain times of the day.

Any driver going through a school zone is on notice that they must use extra caution, and the law reflects this when determining fault. To be responsible in a auto accident, the injured person must prove that the driver was negligent, and by definition failed to use the caution that a reasonable and prudent person would in the same circumstances.

Translated to a school zone, then every driver is held to a higher standard during the time when the school zone is in effect.

Can a Child be at Fault?

It’s possible that the child can be at fault if, for example, they run out into the path of a car or fail to obey the instructions of a school crossing guard. However, even in those cases, California law will apply a percentage of negligence to each person involved, and each will bear their portion of the costs.

This means that if a child darts out into the road in a school zone, and a car was speeding, then fault might be apportioned to both, and the driver’s insurance will only pay a certain percentage of the injuries and other damages.

The best thing to do when injured in an automobile accident is to talk to s Los Angeles Car Accident Attorney who understands the law and has experience getting injured victims the compensation they deserve.

Call the Law Offices of Steers & Associates at 800 824 5416 or click here to contact us online. We have attorneys with years of experience dealing with every type of motor vehicle accident, and we get results against the insurance companies and their highly-paid lawyers. Call us now to even the playing field and get the compensation you deserve.